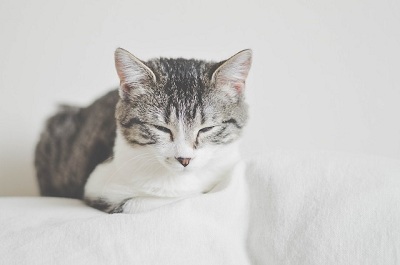 Cats are weird creatures and their behavior is not easy to explain. Many of their behavior patterns have puzzled scientists for ages. One of the weird behavior patterns is when a cat sits in a loaf. Many of us wonder why cats like sitting folding their paws in. Cat owners usually have different theories to explain why cats sit in a loaf. Some of them claim that cats like sitting with their paws in because they want to relax, but they are a little bit suspicious about their environment. For example, a cat may sit in a loaf when trying to relax sitting on a front porch with birds flying around. Others believe that cats like sitting in a loaf to warm their bodies. They believe it is a cat’s way to regulate temperature and find a balance in a cold climate. To learn more about why cats fold their paws in, the article “Why Cats Look Like Bread Sometimes, According to Science” gives us the interesting explanation.

Anecdotally speaking, you’re most likely to spot a cat loaf in his or her favorite spot, be it on your lap, clothes, furniture, or any inconvenient area in your house that your cat has decided to conquer. But experts say it’s probably not just a coincidence that your cat curls up in these kinds of places.

“Generally speaking, a cat who is lying with their paws tucked underneath them is considered relaxed,” cat researcher Mikel Delgado, a postdoctoral fellow at the School of Veterinary Medicine at UC Davis, tells Inverse. “They aren’t preparing to defend themselves or run away.”

Sitting like a loaf may also have “some heat preserving benefits,” Delgado adds. Cats’ thermoneutral zone — the temperature range in which they’re not expending any energy to cool off or get warm — is between 85 and 100 degrees, so tucking themselves in might help retain heat.

Cat body language continues to fascinate us. Some people believe that cats’ affinity to sit with folded paws is a way to stay detached. Cats hate being touched at paws. And this position enables them to stay close to us, but keep their boundaries clear at the same time. Interesting idea about this behavior is that cats sitting with folded paws want to show their unwillingness to communicate and make contact. In any case, this behavior is mostly present in happy cats. Cats sitting with their paws folded in are relaxed and not aggressive. And that is undoubtedly the sign of a happy cat.

Tags: Why Do Cats Fold Their Paws In?