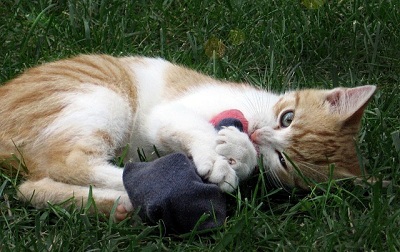 Many cat owners wonder why do their cats like dirty socks. They believe that it is some of the cats’ weird habits like head-butting, rolling, sneering, winking, and the list goes on. Since there is no scientific explanation for this particular habit, many feline experts speculate about. Some of them believe that socks carry a huge amount of human pheromones that accumulates on our feet. Cats are strongly attracted to human pheromones, and they especially like the smell of their owners. Therefore, some people believe that it is one of the of affection. On the other hand, cats are not comfortable with strong odors. For that reason, many people believe that cats who are attracted to dirty socks usually try to diminish the odor by rubbing their cheeks. They want their smell to dominate and define their territory. To learn more about why do cats like dirty socks, the article “Why Does Your Cat Like Stinky Shoes?” gives us the following explanation.

In nature, scents are messages, so in general “animals tend to be attracted to smelly surfaces,” said Carlo Siracusa, a veterinarian at Penn Vet’s Ryan Hospital in Philadelphia. Smelly shoes are likely to come with odors, including pheromones, from other cats or animals. When a cat rubs on smelly shoes, he probably wants to ‘rewrite’ the message on the shoes, adding his signature; he may also want to exchange signals with the owner who is a member of the same social group.”

To answer the question – why do cats like dirty socks – feline experts believe that it can be a way of picking information. Namely, a sense of smell is essential to cats. It helps them navigate their lives. They gather a huge amount of information from their powerful sense of smell. Human socks, as well as shoes, carry a lot of information and our little furry friends might find interesting to find out where we have been and what we were doing all day. Even though many people believe that it is just one weird cat habit, it actually does not happen without the reason. But, to find out what really stands behind the cat’s affection for dirty socks we have to wait for the facts.