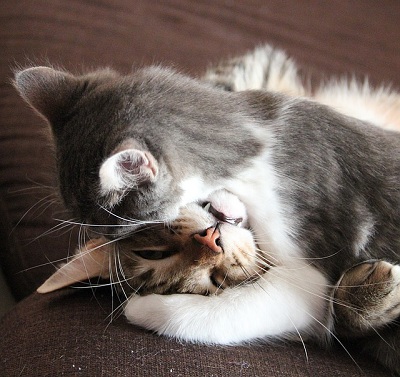 Many cat owners have wondered why their cats does not like hugs and how to make it more affectionate and open to hugs? Feline experts believe that each cat has its specific personality that can be more or less prone to cuddling and hugging. They also think that certain breeds such as Burmese and Ragdoll cats are naturally more predisposed to make a deep and strong bond with their owners.

On the other hand, some cats are more independent and do not like to be hugged. For the indecisive type of cats, we can use a tactical approach to convince them to be hugged. The better approach is the slow and gradual approach that will give a cat time to make the affectionate bond with its owner on its own terms. Namely, feline experts advise us choosing a time when a cat is completely relaxed. Then, let it make the first step. Cats do not like sudden and quick movements more they want to be forced to do anything they do not want. If a cat comes closer and rubs its head, then it is time to scratch her on the head or on her back. Usually, after that, a cat will lie down and purr. This is the way a cat invites us for a cuddling session. When a cat stretches its paw or rubbing its head against us, it is the clearest sign it needs to be hugged. To find out more about cats and hugging, the article “Do Dogs and Cats Like to Be Hugged?” gives us the interesting explanation about whether cats like hugs.

Cats can be more standoffish than dogs; that’s just their independent nature. Like dogs, cats feel threatened by other cats and even their human standing over them, especially if eye contact is being made. In both the dog and cat world, eye contact can mean aggression and most cats become uncomfortable when we stare at them. When we wrap our arms around our pet’s neck to give them hugs, most pets would prefer that we didn’t, if they had a choice. That’s one area where dogs and cats do agree.

Like dogs, most cats don’t like the confining feeling that comes with one of our loving embraces. A cat will react in the same way as a dog when we drop our hand down toward their head. It’s seen as an aggressive move on our part. A cat will generally let you know when they want attention, and it’s usually on their terms. Plus, very few cats or dogs like to be held down against their will which leaves them with a feeling of no control over the situation.

However, there are a lot of cats that they make strong bonds with their owners, but still do not like hugs. Feline experts suggest not forcing anything and just let them be. Cats, which do not like hugs will hardly change their minds. No matter how hard we try, they simply are not of that sort. But still, they are adorable and amazing pets.