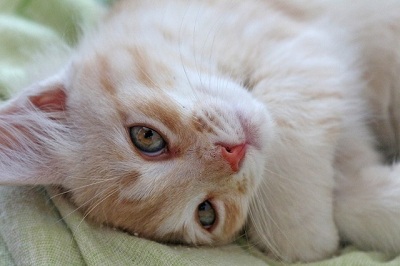 Anemia in cats appears for various causes. It can occur in a mild form, but in some cases, it can represent a serious health condition. When mild, anemia is not obvious. Cats with mild anemia do not show too many signs that can point to anemia. Usually, pale gums appear as the single symptom of the mild anemia. Severe anemia is easier to spot; lethargy, rapid breathing, lack of appetite, losing interest in any activity, are the most common signs of anemia in cats. When it comes to diagnosing, there are various blood tests that diagnose irregularity and loss of red blood cells immediately. The simplest test is known as a packed cell volume (PCV) that detects a percentage of red blood cells in a bloodstream. There are many other tests that help discover whether anemia is a regenerative or non-regenerative type. Regenerative type of anemia occurs when a cat loses suddenly lots of blood, like an injury. It also happens when a cat suffers from parasitic or flea infestation, infection, or cancer. On the other hand, non-regenerative type of anemia takes place because of a chronic illness, such as kidney disease. This type of anemia is more dangerous because it is difficult to spot and the red cells are hard to replace. Frequently, senior cats are more prone to non-regenerative type, while young cats and kittens are susceptible to a regenerative type. To find out more about the possible causes of anemia in cats, the article “Watch for This Telltale Symptom of Chronic Kidney Disease and Leukemia” lists the following.

Causes of regenerative anemia include hemorrhage brought on by an accident or internal bleeding; parasites; immune-mediated hemolytic anemia, which occurs when a cat’s body attacks its own red blood cells; and Heinz body hemolytic anemia. Other causes include certain medications, foods, or toxins like acetaminophen or propylene glycol, which is antifreeze; and copper, zinc, and onion toxicosis. A highly unusual cause of feline anemia is a rare condition called neonatal isoerythrolysis — an immune-mediated condition in which kittens with type A blood drink colostrum from a mother with type B blood.

If we want to prevent our dearest furry friends catching anemia of any kind, we may do it so by keeping them indoors and do regular flea and parasitic control. We also want to be sure that our old cat does not have a certain underlying issue, or at least, keep diagnosed disease under control.

Tags: Causes of Anemia in Cats