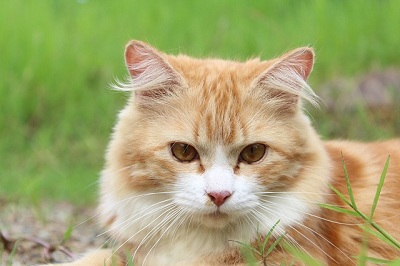 The disease known as ringworm in cats is, actually, a fungal disease that is also called dermatophytosis or dermatomycosis. It usually affects young cats, cats with weak immune system and senior cats. The disease gets its name because of a circle that encompasses white dot in the middle, resembling ring by its shape. In the past, it was mistakenly believed that some kind of worm causes infection. There are three types of fungus that causes ringworm in cats: Microsporum Canis, Trichophyton, and Microsporum Gypsum. Among them, Microsporum Canis is the most frequent spores that cause infection. As the highly contagious disease, ringworm spreads in two ways – by direct contact from cat to cat, and indirectly – by a contagious environment. According to feline experts, the fungus is extremely resistant and can survive up to 24 months. For that reason, they suggest clean and sanitize bedding, bowls, carpets, carrier and each item that contagious cat gets in touch with. They recommend using the solution of bleach and water in 1:30 proportion after cleaning infected stuff. Sanitizing with the solution is the only guarantee that the infection will be stopped from spreading further. Veterinarians also suggest putting an infected cat into quarantine until it becomes free from disease. Particular breed such as Himalayans and Persians are especially prone to ringworm. In these cases, prevention measures should be stronger than with other cats. To find out more about common misconceptions about ringworm in cats, the article “Debunking the Myth of Ringworms” gives us the following explanation.

“Ring around the rosy, pocket full of posies, ashes, ashes”…”ring around the collar”…ring, ring, ring, someone is calling, ringworm…what? When we think about ringworm in veterinary medicine it neither makes a ringing sound nor is it a worm. It is actually a fungal infection that may cause circular or “ring-like” skin lesions, hence the name. More properly, it is named dermatophytosis, and it typically affects superficial layers of the skin, although fungal infections can occur in the nails and keratinized layers of the hairs. The two most common species of dermatophytes we diagnose in pets are Mircrosporum sp. and Trichophyton sp., although there can be many more.
These fungal infections are more commonly seen in cats, but can occur in dogs as well. It is considered a zoonotic disease since we, as people, can “get ringworm.” Exposure or contact with dermatophytes may or may not result in an infection with either pets or people. Sometimes an infection in an animal can also go undetected since there are no outward visible lesions. These animals can be simply in a carrier state. However, they can still transmit the fungus to others if exposure occurs.

However, prevention measures are not advisable for cats only. They are necessary for humans, too. Ringworm in cats can affect humans, particularly children, immunosuppressed persons, and older people. They can get the infection when they spend their time in the closeness of contagious cats and their environment. They also can get the infection by handling infected cats and contaminated objects.