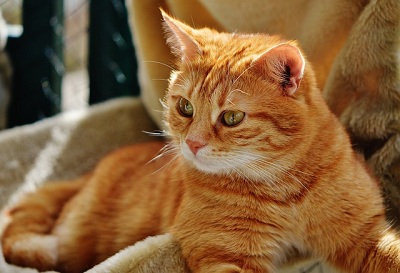 Ringworm in cats is the highly contagious disease that spreads from cat to cat, from contagious objects to cats and through a contagious environment, such as beddings, carriers, bowls, perches, curtains, carpets, etc. The disease also spreads to humans, especially if the immune system of a person is weak. Therefore, young children, sick people, and elders are more prone to catch the infection. The infection can transmit symptomatic as well as asymptomatic cats. If we want to prevent the disease from spreading, it is wise to know the symptoms. The most common symptoms of ringworm in cats are a small bald lesion on the cat’s skin. The lesion usually has a white dot in the middle and red circle devoid of hair. If left untreated, the bald patches can spread across the whole body, most often in the areas of the cat’s head – chin, lips, ears, and on the cat’s tail. Other symptoms are less obvious and can be mixed with the symptoms of any other disease. Among them, the most common are excessive shedding, greasy fur, scratching, and hairballs. According to veterinarians, almost 50 percent of cat owners catch the infection from an asymptomatic cat, not even knowing that they get ringworm. Many of them mistakenly suspected that the lesion on their bodies is eczema. Cats can catch the infection in every place where many cats are hanging around, such as cat exhibition, veterinary clinics, etc. To find out more about ringworm and how contagious it is to humans, the article “Zoonotic Disease: What Can I Catch from My Cat?” gives us interesting information.

Ringworm is not caused by a worm at all; it is a skin infection caused by a group of fungi. Infected cats most often come from environments housing large numbers of animals. In cats, ringworm appears as a dry, gray, scaly patch on the skin. In humans, ringworm often appears as a round, red, itchy lesion with a ring of scale around the edge. Ringworm is transmitted by contact with an infected animal’s skin or fur, either directly or from a contaminated environment. Infected cats continuously drop fungal spores from their skin and fur; these spores, which remain capable of causing infection for many months, are difficult to eradicate from a household. Children are particularly at risk of infection. To reduce environmental contamination, confine infected cats to one room until they are free of infection; then thoroughly clean and disinfect the household.

One of the largest groups that can be infected from ringworm easily is children. They can get the infection from feral cats that are recently adopted or have been raised in kennels, where hygienic measures are not well performed. On the other hand, cats who are under stress or bath too much can be the source of infection. Therefore, taking care of overall cat health and good hygiene is a key to the safety of children and humans, too.

Tags: Is Ringworm Contagious to Humans?